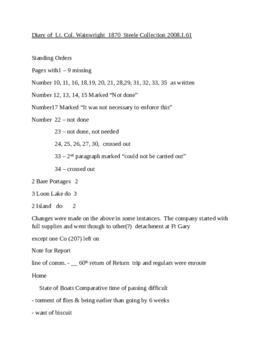 Consists of a diary kept by Major Griffiths Wainwright, 1870-1871, during his service with the Red River Expedition of 1870, and two maps. The diary entries are short, and also include entries about number of portages made, supplies and rations required, and various notes and reports. A two page entry at the back of the diary was written in 1910 by Sam Steele, explaining that the diary was given to him, and filling the reader in on what Major Wainwright did once the Expedition was completed. A list of Detachment rules printed at the front of the diary have been briefly annotated by [Sam Steele?]. The maps, hand-drawn and annotated, depict the route from Rat Portage to Fort Alexander, and from Fort William to Fort Francis.

Map: "From Rat Portage to Fort Alexander (distance of about 160 miles)"

A hand-drawn and annotated map; annotated with some comment about places visited; includes direction rose and scale note

Printed postcard announcing a meeting of the Nova Scotia Historical Society with Col. Wainewright [sic] presenting a paper at the meeting: "The North West and Red River Expedition".

Loose item from diary: The Veteran's Association of Vancouver, B.C.

Printed note announcing details about a meeting of the Veteran's Association of Vancouver, B.C.; addressed by hand to Lt. Col. Wainwright