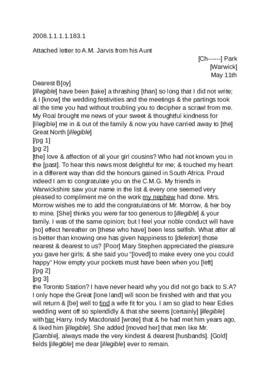 An attached handwritten letter from A.M. Jarvis's Aunt J.J. Harwood Steele notes that the aunt talks about the fine reputation of Strathcona's Horse, and mentions Lord Dundonal's impending visit. He also says that the aunt's return address of "Charlecote Park" is associated with Shakespeare.

General Correspondence – Personal letters, re: various matters; includes letters from former South African colleagues, as well as a letter from someone at The Ottawa Free Press expressing his frustration at not yet hearing from Lord Strathcona for a planned history of the regiment; includes a letter from A.M. Jarvis with an attached typed chart titled: “Measurements of Eskimos taken at Herschel Island 1908...”, etc. Handwritten; Typewritten.

Handwritten letter from Major A.M.Jarvis to SBS commenting on the correspondence received with respect to Lieutenants Kirkpatrick and Tobin, re: gold theft. 2 pp.