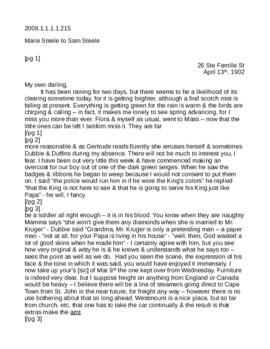 Includes an attached letter to SBS from Flora Steele; notes to SBS from his children; and a letter from Frank Oliver sent to Marie and forwarded to SBS

A typewritten letter sent to Marie Steele from Frank Oliver in Ottawa, and forwarded to SBS, re: Police Pension Bill.

Correspondence, incoming and outgoing, sent to and from SBS in his capacity as Colonel in Command of Military District 13; includes a letter to Frank Oliver, Minister of the Interior, and more information about the proposed Infantry Regiment at Edmonton. Typewritten

Win the War Convention Correspondence inviting General Steele to support the Win the War conventions planned for Canada, and his acceptance of this request, and campaign to promote the conventions.