Bulletins and booklets originating in Quebec. The bulletins of the Home Makers Clubs (Cercles de me nageres) contain reports of women's groups on Indian reserves.

Bulletins, newspapers and other publications originating in Saskatchewan. Includes "Welfare of Our Native Population," a brief of the Federation of Saskatchewan Indians, copies of "Indian Outlook," and other private publications.

The title is based on the contents of the series.

Department of Citizenship and Immigration: Annual Reports, "The Indian People of Canada," "Citizenship Projects Among Indians."

The series consists of minutes, scripts for radio and theatre, songs, programmes, costumes, and post cards.

The title is based on the content of the series.

Government Publications and Other Printed Material.

House of Commons Debates. Scattered issues. The report of August 1, 1956 consists of only one page.

House of Commons. Minutes of Proceedings and Evidence of the Joint Committee on Indian Affairs; Numbers 1 to 7.

House of Commons. Minutes of Proceedings and Evidence of the Special Committee on Reconstruction and Re-Establishment.

House of Commons. Minutes of the Joint Committee on Indian Affairs; Numbers 1 to 14, except 5.

House of Commons. Minutes of the Joint Committee on Indian Affairs; Numbers 1 to 16.

House of Commons. Minutes to Examine and Consider the Indian Act; Numbers 1 to 41.

House of Commons. Minutes to Examine and Consider the Indian Act; Numbers to 4.

House of Commons. Minutes, Proceedings and Evidence of the Special Joint Committee to Examine and Consider the Indian Act; Numbers 1 to 41, except 13.

Indian Affairs Branch: Booklets and pamphlets. Includes "The Canadian Indian," "Indians of the Prairie Provinces," "The Indian People and the Indian Act" and "Choosing a Path."

News bulletins and booklets originating in Alberta. Contains five issues of Within Our Borders, "Rehabilitation and Integration," and "A Guide to External Aids and Resources for the Direct Use of Leaders on Reserves."

Newsletter, book and other printed material originating in Ontario.

Northwest Territories Summer School and Convention for teachers. Publication of the first session.

Printed material and booklets originating in British Columbia. Includes annual report of the Okanagan Society for the Revival of Indian Arts and Crafts (1946), "Native Canadians" and "The Tale of the Nativity."

Reports, excerpt and booklet originating in Manitoba. Includes Annual Reports of the Community Development Services, Department of Welfare, Report of the Organization of a Fishermen's Co-op, and "A Guide to Agencies Working with Indians and Metis in the Cities and Larger Towns of Manitoba." 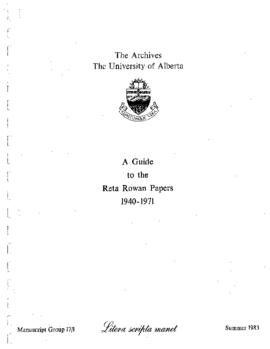 The Reta Rowan fonds covers the years from 1940 to 1971. The material consists of correspondence, minutes, briefs, reports, publications, periodicals, newspapers, drawings, print and negative photographs. The books in the Reta Rowan fonds were listed on a separate inventory in 1977. Originally, the majority of the files were arranged in chronological order under the society's or association's title, while the remainder were filed by the organization's name or by subject, or left unlabelled. Mrs. Rowan's arrangement has been followed where possible but all unlabelled or loose files have been placed in the proper year or provided with a subject title.

Scripts: radio, indoor pageant.Contains typed scripts for: "The Warsaw Chanticleer"; "Abraham Lincoln" and "Rendez-vous in April" by Elizabeth Sterling Haynes; and "Canadians All."

"Studies in minority Groups," compiled by the Sociology Department, University of Alberta.

The Camsell Arrow, published by the staff and patients of the Charles Camsell Hospital, Edmonton. Volumes 7-12; scattered issues.

The Canadian Indian, a reference paper published by the Department of Citizenship and Immigration, Indian Affairs Branch. Contains a summary of the main provisions of Pre-Confederation Treaties, of Treaties 1 to 11, and of those made in October and November, 1923. Items 5 to 17 are publications of the Government of Canada; some are annotated

"The Challenge of Assisting the Canadian Aboriginal People to Adjust to Urban Environments; a Report of the First Western Canada Indian-Metis Seminar."

The Friends of the Indians Society.

The series title is based on the contents of records.

The Indian Association of Alberta.

Title is based on the content of the series.

"The Metis in Alberta Society, with Special Reference to Social, Economic and Cultural Factors Associated with the High Incidence of,Tuberculosis," by B.Y. Card.

The Native Voice. Loose sheets. Contains poems of Chief Sepass, prior to publication in book form.

The Native Voice. Volumes 20-22; incomplete. The issue of August 1966 contains an article on the Indian people of Wabasca with notes by Mrs. Rowan attached.

The Native Voice, official organ of the Native Brotherhood of British Columbia.

"The Prairie Call," published by the Indian Council of the Indian and Metis Friendship Centre, Winnipeg.

The Treaties, reprinted by the Government of Saskatchewan from The Treaties of Canada with the Indians of Manitoba and the North-West Territories by Alexander Morris (March 1961). Contains the negotiations and terms of Treaties 3 to 7 reproduced from Morris, and the terms of Treaties 8 and 10.

Trea No. 8 and Adhesions, Reports. Includes a map of the territory ceded under Treaty Eight.

Photo is one of a series of twenty-seven in a brown paper folder, taken by Reta Rowan at the Indian Association of Alberta annual meeting held at the Driftpile Indian Reserve in June, 1955. Photo no. 20 depicts two young girls (unidentified). 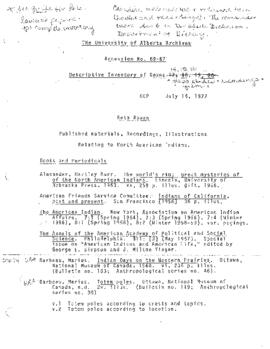 Friends of the Indian Society: minutes, correspondence, and papers. 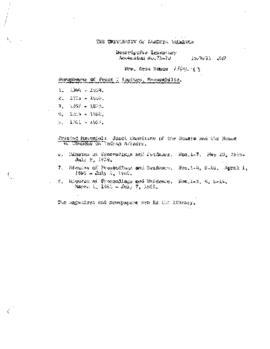 Scrapbooks, Friends of the Indian Society.