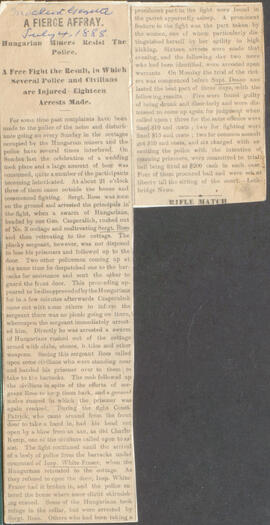 “A Fierce Affray. / Hungarian Miners Resist The Police. / A Free Fight the Result, in Which Several Police and Civilians are Injured – Eighteen Arrests Made.”

“On Sunday last the celebration of a wedding took place and a large amount of beer was consumed, quite a number of the participants becoming intoxicated. At around 21 o’clock three of them came outside the house and commenced fighting. Sergt. Ross was soon on the ground and arrested the principals in the fight, when a swarm of Hungarians, headed by one Geo. Czaperalich, rushed out . . . Czaperalich came out with some others to inform the sergeant there was no picnic going on there, whereupon the sergeant immediately arrested him. Directly he was arrested a swarm of Hungarians rushed out of the cottage armed with clubs, stones, bottles and other weapons. . . . A prominent feature in the fight was the part taken by the women, one of whom particularly distinguished herself by her agility in high kicking.”