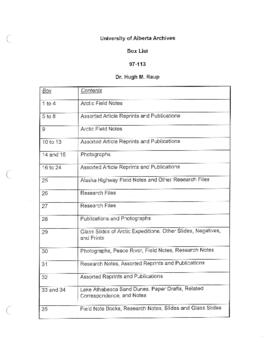 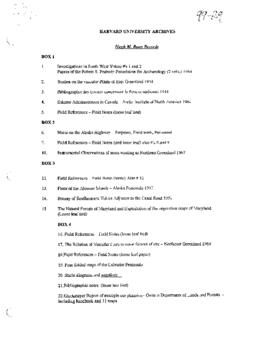 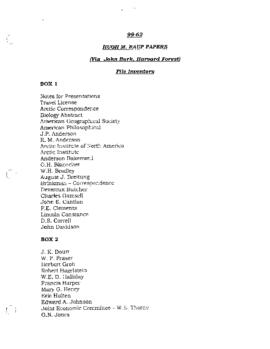 16.60 m of textual records and other material

Since its inception in the early 1900s, Harvard Forest researchers have maintained extensive records of institutional research and forestry operations. These documents are permanently housed in the Harvard Forest Archives, a purpose-built, climate controlled facility. The Harvard Archives collection consists of a variety of materials including original research data and notes, publications and theses, a large map library, comprehensive forestry and vegetation records of all Harvard Forest properties from 1907 to the present, photographs and slides, soil and tree core samples, and regional records such as historical soil and forest surveys and census data.

Dr. Hugh M. Raup conducted many studies of Canada's botany and natural history in his work as a botanist and naturalist. Dr. Raup served as chairman of the Arctic Research Institute's Laboratory in the 1930s, and also in this period, conducted studies of bison management strategies in Wood Buffalo National Park. In 1943, he was sponsored by the National Museum of Canada to complete botanical explorations of Northern Canada, and in 1944, with his wife L.G.Raup, collected the first specimens of the rare plant 'Yukon Draba'. Much of Dr. Raup's research focused on the Mesters Vig region of Greenland. He also spent a number of summers in the Lake Athabaska and Slave Lake Regions, Kluane Lake and in the MacKenzie Mountains of Alaska, in addition to completing a vegetation survey of the Alaska Highway. Dr. Raup was made an Honorary Member of the Ottawa Field-Naturalist's Club in 1945 for his work in the field of Botany. For 21 years, Hugh Raup was director of the Harvard Forest (Harvard University), and retired as Professor Emeritus from Harvard University.

The records in the Raup fonds were donated to the University of Alberta Archives by the Harvard Forest Archives.

File inventories have been prepared for each accession within the fonds.