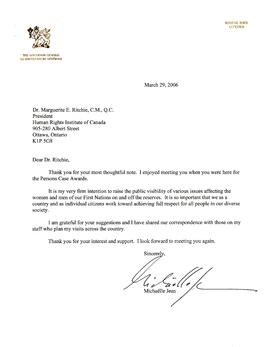 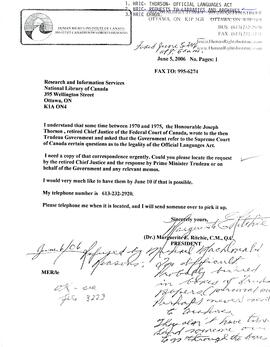 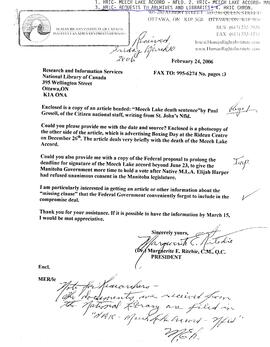 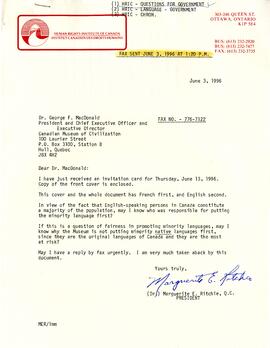 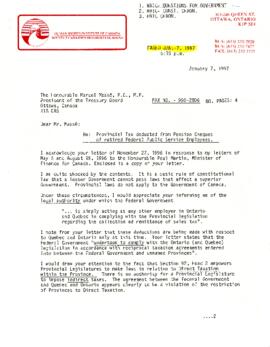 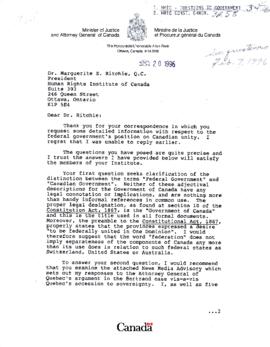 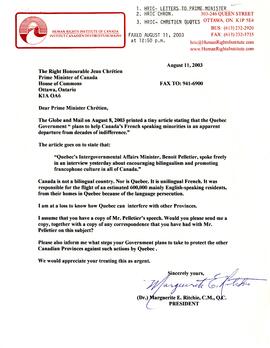 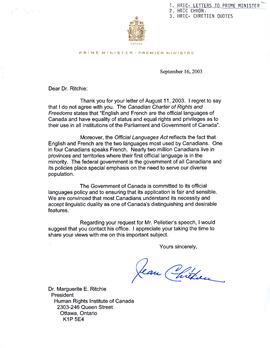 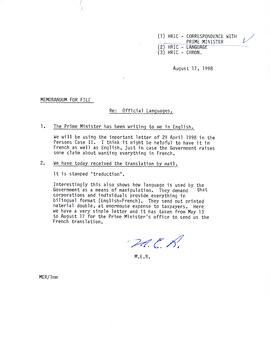 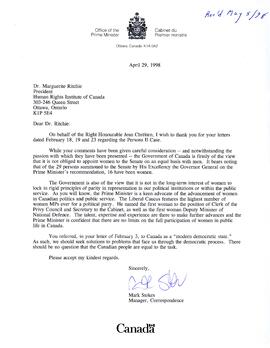 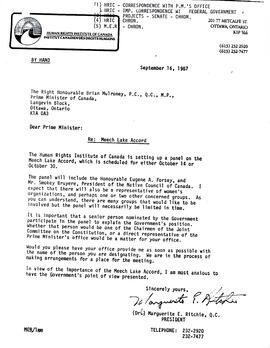 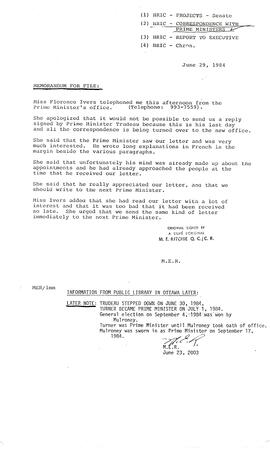 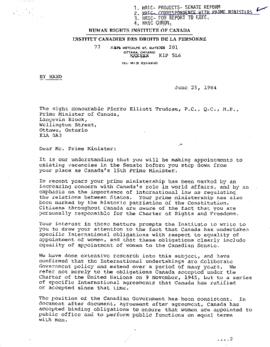 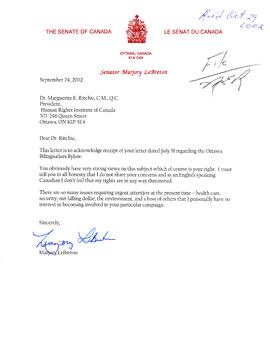 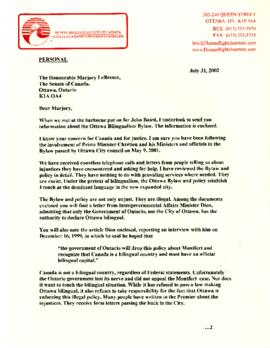 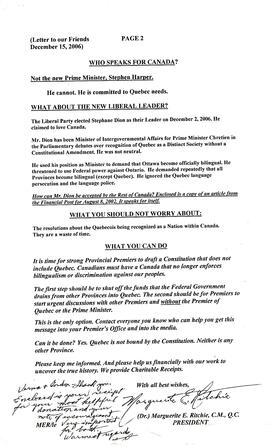 The Government of Canada series is the largest series of the fonds and contains 26 subseries arranged by subject. Materials were created between 1948 and 2013, and also includes research materials dating from 1867. This series covers all subseries related to the function and role of the federal government, beliefs and actions of politicians, relationships and conflicts between the provinces and the federal government, support from politicians for Senate reform and Persons Case II, the constitution, and the Official Languages Act and bilingualism. Materials in this series are predominately research and communications with public figures. This includes newspaper clippings, speeches, interviews, press releases, memorandum, and correspondence.

This series focuses on Prime Ministers, Senators, Members of Parliament, Governor Generals, and appointed Judges. Government bodies featured in this series include materials on the Senate and Senate reform, the functioning of the House of Commons, and the creation and function of government departments, such as Heritage Canada. The actions of political parties and governments included in this series are conflicts between the federal government and provincial governments, political scandals and government corruptions, political opinions of the federal parties, and the effect of political ideology on representation of historical events. Enacted and proposed legislation discussed in this series are the 1982 constitution, the Charter of Rights and Freedom, the Meech Lake Accord, the Charlottetown Accord, and the Official Languages Act. Marguerite Ritchie was initially against the constitution as she felt it went against the British North America Act of 1867. After the constitution and the Charter came into full force in 1985 her views began to shift. She was also opposed to the Meech Lake and Charlottetown Accords. The Official Languages Act and bilingualism materials deal with the impact of bilingualism policies on all levels of government, education in bilingual communities in northern Ontario, the bilingual cities of Moncton and Ottawa, employment in the federal government, federal government funding for translation and language training, and language laws in Quebec. Marguerite Ritchie was critical of official bilingualism and fought for the rights of Anglophones in Quebec. The Knowledge Project was an HRI effort to gather evidence of Canada becoming increasingly francophone and losing British traditions. Marguerite Ritchie had a shift in opinion during the Meech Lake Accord and felt that Quebec should separate from Canada so that it would not threaten the survival of English Canada. Additionally, this series contains research on other human rights activists and whistleblowers fighting against human right abuses and political corruption.

The Oka Crisis began in Oka, Quebec, when the town wanted to extend a golf course from 9 holes to 18. The expansion required use of disputed land that lay between the golf course and neighbouring Kanesatake Mohawk reserve and contained a burial ground and a sacred pine forest. The land dispute had been previously settled in 1986 against the Mohawk band and so when plans for development of the golf course were made the mayor of Oka did not consult the band. As development was about to begin, 60 Mohawk warriors barricaded the road to the disputed land, physically stopping the developers. Provincial police and RCMP officers stood against the warriors who had grown in number to hundreds and a standoff began that lasted from July 11, 1990 until September 26, 1990. During this time one SQ and one Mohawk elder were killed and dozens more were wounded. The source of the bullet that killed the SQ was never determined, while the Mohawk elder was killed during an anti-Mohawk protest by locals. Aboriginal activists in solidarity with the Oka reserve protested in Kahnawake and barricaded the Mercier Bridge in Montreal and various highways where they passed through reserve land. The growing Mohawk barriers were protested by locals. The army was deployed on request of the premier of Quebec after the RCMP aid to the SQ did not end the crisis. After a final confrontation where a Mohawk man setting off flares was responded to by the RCMP turning a water hose on the crowd, the Mohawk laid down their weapons and abandoned the barricade. The golf course was cancelled by the mayor and the disputed land was bought by the federal government to prevent further development. The land remains disputed as land claims have never officially been settled.

The FLQ (Front de liberation du Quebec) was a terrorist group active through the 1960s in Montreal which culminated in the October Crisis of 1970 when British Trade Commissioner James Cross was kidnapped and Quebec Labour Minister Pierre Laporte was murdered. The FLQ were hardline sovereigntists who were known to use violence in their activism, including bombing the Montreal Stock Exchange in 1969. The War Measures Act was enacted for the first and only time during a time of peace by Prime Minister Pierre Elliott Trudeau and the Canadian army was called in to find the FLQ and the kidnapped trade commissioner. Popular support for the FLQ faded after the announcement of the murder of Labour Minister Pierre Laporte. The FLQ members and James Cross were found in December 1970. Laporte’s kidnappers and murders were tried and convicted while Cross’ kidnappers were granted passage to Cuba with Castro’s permission.

The Meech Lake Accord and the Charlottetown Accord were attempts made by Prime Minister Brian Mulroney and his Progressive Conservative government to amend the 1982 constitution signed by Liberal Prime Minister Pierre Elliott Trudeau. Amendments were proposed to appease Quebec so they would ratify the constitution. Appeasements included recognizing Quebec as a distinct society, having appointments for Supreme Court judges and Senators made from lists submitted by the provinces or regions, a new amendment method for the constitution, compensation for opting out of federal programs, and more immigration control for the provinces. Provincial signatures were not required for the 1982 constitution to be effective, but the symbolic support was desired for French-English relations. The Meech Lake Accord was drafted at Meech Lake outside of Gatineau, Quebec, by Prime Minister Brian Mulroney and the 10 provincial premiers. It was heavily criticized for including the territories only through video conference and not including native band councils. The Meech Lake Accord required the unanimous support of all provincial legislatures to be enacted into law. It failed at the provincial level when Elijah Harper, a first nations Member of Provincial Parliament from Manitoba, voted against it by holding up a feather in protest of native bands having been excluded, which in turn created a domino effect across provincial legislatures. The Charlottetown Accord addressed the concerns from the failed Meech Lake Accord and was set to a popular vote in a referendum where it failed in 7 of 12 provinces and territories with a 54.3% ‘no’ vote nationwide. The Human Rights Institute of Canada fought against both constitutional accords on the grounds that Quebec should not be given ‘special treatment’ with respect to the other provinces and that the Meech Lake Accord was not democratically or fairly drafted.

The Famous Five: Emily Murphy, Irene Marryat Parlby, Nellie Mooney McClung, Louise Crummy McKinney, and Henrietta Muir Edwards, were women’s activists from Alberta. They submitted a petition to Prime Minister William Lyon Mackenzie King to submit a reference to the Supreme Court of Canada, which became known as the Persons Case. The reference asked if women were considered persons under the qualifications to be appointed to Senate. A ruling in an English court in 1876 had declared that “women are persons in matters of pains and penalties, but are not persons in matters of rights and privileges.” Though this ruling had not set a precedent, the sentiment represented a common interpretation of legislation. In their ruling on the reference, the Supreme Court said that according to tradition, women were not persons for the purpose of Senate appointment. This ruling was appealed to the Privy Council in the House of Lords in England as the highest court of Canada. The Privy Council unanimously deemed women to be full persons under the law and therefore able to be appointed to the Senate. The Human Rights Institute of Canada worked to correct misrepresentations of the Persons Case and to properly contextualize its importance in the history of women’s rights.