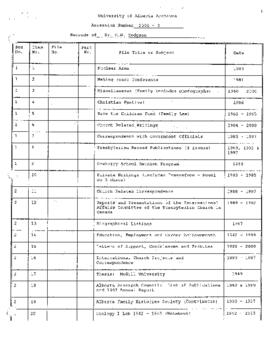 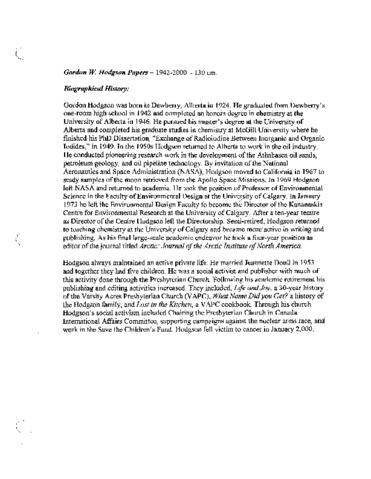 Scientist, Activist, Educator, 1924-2000. Gordon Hodgson was born in Dewberry, Alberta in 1924. He graduated from Dewberry's one-room high school in 1942 and completed an honors degree in chemistry at the University of Alberta in 1946. He pursued his master's degree at the University of Alberta and completed his graduate studies in chemistry at McGill University where he finished his Ph.D. Dissertation, 'Exchange of Radioiodine Between Inorganic and Organic Iodides,' in 1949. In the 1950s Hodgson returned to Alberta to work in the oil industry. He conducted pioneering research work in the development of the Athabasca oil sands, petroleum geology, and oil pipeline technology. By invitation of the National Aeronautics and Space Administration (NASA), Hodgson moved to California in 1967 to study samples of the moon retrieved from the Apollo Space Missions. In 1969 Hodgson left NASA and returned to academia. He took the position of Professor of Environmental Science in the Faculty of Environmental Design at the University of Calgary. In January 1973 he left the Environmental Design Faculty to become the Director of the Kananaskis Centre for Environmental Research at the University of Calgary. After a ten-year tenure as Director of the Centre Hodgson left the Directorship. Semi-retired, Hodgson returned to teaching chemistry at the University of Calgary and became more active in writing and publishing. As his final large-scale academic endeavor he took a four-year position as editor of the journal titled Arctic: Journal of the Arctic Institute of North America. Hodgson always maintained an active private life. He married Jeannette Doull in 1953 and together they had five children. He was a social activist and publisher with much of this activity done through the Presbyterian Church. Following his academic retirement his publishing and editing activities increased. They included, Life and Joy, a 30-year history of the Varsity Acres Presbyterian Church (VAPC), What Name Did you Get?, a history of the Hodgson family, and Lost in the Kitchen, a VAPC cookbook. Through his church, Hodgson's social activism included chairing the Presbyterian Church in Canada International Affairs Committee, supporting campaigns against the nuclear arms race, and work in the Save the Children's Fund. Hodgson died of cancer in January 2,000.