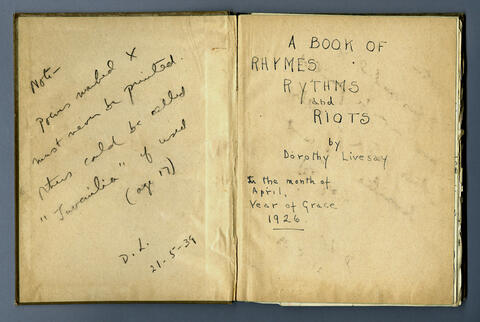 Dorothy Livesay (1909-1996) was one of the leading Canadian poets of the twentieth century. She was born in Winnipeg to the poet and journalist Florence (née Randal) Livesay (1874-1953) and the journalist John Frederick Bligh Livesay (1874-1944). Dorothy Livesay attended the University of Toronto, where she graduated in 1931 with a Bachelor of Arts in modern languages. During her second year of studies—at the age of nineteen—she published her first collection of poetry, entitled Green Pitcher. She traveled to France in her third year of studies, and after finishing her B.A. at the University of Toronto, she returned to France to complete a Master's thesis at Sorbonne University in Paris. She returned to Canada in 1932 with an increasing sense of social concern that motivated her to complete a social work course at the University of Toronto. She then did welfare work in Montreal and New Jersey before moving to Vancouver in 1936. While working as a social worker in Vancouver, she met Duncan Macnair and they were married in August of 1937. They went on to raise two children: Peter and Marcia. During this time Livesay was active in the Young Communist League, the Progressive Arts Club, and the League Against War and Fascism.
Livesay's poetry was honoured with two Governor General's Awards—in 1940 for Day and Night and in 1947 for Poems for People. In 1947 she was awarded the Lorne Pierce Gold Medal for her outstanding work in Canadian literature over the years. After Duncan Macnair died in 1959, Livesay worked as a programme assistant for UNESCO in Paris and then in Northern Rhodesia (now Zambia) until 1963, at which time she returned to Canada. From 1965 to 1984 she enjoyed a demanding spate of teaching and writer-in-residence positions in universities across Canada. In 1975 she founded, subsidized, and edited the journal Contemporary Verse 2 (CV/II) in remembrance of Alan Crawley's Contemporary Verse. After serving on such committees as the Committee for an Independent Canada, the League of Canadian Poets, the Association of Canadian University Teachers of English, World Federalists, Amnesty International, and the Unitarian Church, Livesay retired to Victoria, where she died in 1996.

Textual records are in good condition. Some records have minor damage, including discolouration, tears, and folds.

The Dorothy Livesay Archive is available to students, staff, and the general public for use within the library’s supervised reading room upon presentation of valid photo identification (e.g., ONEcard, driver’s license, passport, or citizenship card with photo).
All researchers (including students, faculty, visiting scholars, and members of the general public) must submit a Retrieval Request Form at least 24 hours before their visit to Bruce Peel Special Collections in order to be sure that library materials have been retrieved from storage and are available for their use.

No further accruals are expected

Information based upon contents of the material and documentation created by former University of Alberta Library Special Collections staff.