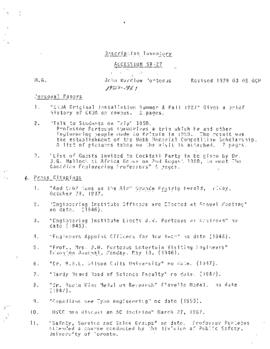 Instruction in this discipline was the responsibility of a division of the Department of Physics in the Faculty of Arts and Science from 1914 to 1925, when it became part of the Faculty of Applied Science in its own department. Its education program attempts to provide the fundamentals of electrical engineering at the same time that it allows specialization in a variety of sub- disciplines, particularly for those students pursuing graduate work leading to an MEng, MSc or PhD degree. Some areas of research being conducted include biomedical engineering, lasers, and communications technology (PACCR, 1985). Heads: 1924-1936 Hector John MacLeod; 1937-1946 Ernest Geoffrey Cullwick; 1942-1943 Wilfred Ernest Cornish (Acting); [1944- 1947] John Wardlaw Porteous (Acting); 1947-1964 James Alfred Harle 1964-1969 George Brown Walker. Chairs: 1969-1974 George Brown Walker; 1974-1987 Christopher R. James; 1987- Peter Robert Smy.