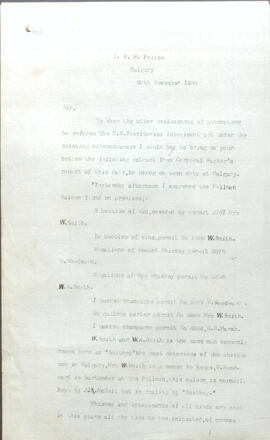 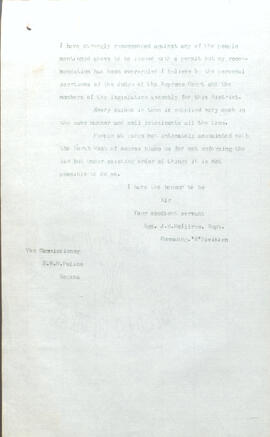 Two (2) page mimeographed copy of a letter. One of three police reports copied and attached as reference documents to the memo 2011.002.001.

Two page mimeographed copy of a letter written to the Commissioner of the NWMP in Regina by J.H. McIllree Supt. Commanding “E” Division.
The letter contains extracts from a police report written by Corporal Walker. Corporal Walker conducted an inspection of Pullman Saloon which is “normally kept by J. McNeil” but is actually kept by a local man known as “Smithey” who is described as “the most notorious of the whiskey men in Calgary.” All kinds of whiskey and intoxicants were found on the property, covered by permits largely made out to “Smithey” under variations of his own name, the name of “a woman he keeps” and a bartender.
Sgd. McIllree claims his recommendation that permits not be issued to these individuals “has been over-ruled . . . by the personal exertions of the Judge of the Supreme Court and the members of the legislative assembly for this District.”