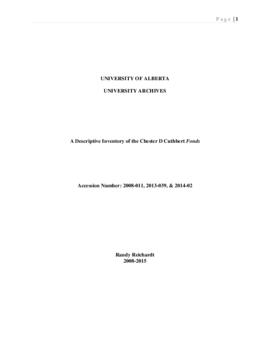 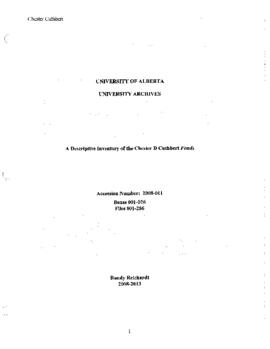 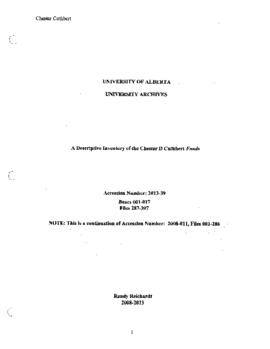 Chester D. Cuthbert was born in 1913 and is known for having had one of the largest private collections of material related to science fiction, fantasy and psychic phenomena in Canada. He donated his enormous collection of science fiction items spanning more than 80 years of publication to the University of Alberta Library, named the Chester D. Cuthbert Collection.
At the age of 12, Chester read The Ship of Ishtar by Abraham Merritt, which inspired his love of science fiction, and became an avid collector of the genre. He went on to be actively involved in both the local and national organizations relating to science fiction, including organizing the Winnipeg Science Fiction Society in 1950 and becoming president of the Canadian Science-Fiction Association (CSFA) in 1951.
Chester published two stories, with his debut story, "The Sublime Vigil," appearing in the February 1934 issue of Wonder Stories and his second appearing in the July issue of the same magazine. He also wrote short book reviews up until the early 2000s, of the thousands of titles he read, resulting in approximately 5,500 individual reviews.
Chester primarily worked for the St. Paul Fire and Marine Insurance Company and was with the same company for 37 years, eventually becoming a claims manager. He retired in 1967 at age 55.
Chester married Muriel Winnifred Chapman on 29 April 1944. They have five children, nine grandchildren and six great-grandchildren. Murial passed away in January 2007, and Chester passed away March 20, 2009 in Winnipeg at the age of 96.

The Book Reviews of Chester Cuthbert
Chester D Cuthbert of Winnipeg, MB was a member of "First Fandom", the first group of science fiction fans to emerge in the 1930s. Over the decades, he amassed a huge collection of science fiction, fantasy, and general fiction books, which were donated to the University of Alberta Libraries in 2007. Through the decades of his life, up to the early 2000s, Chester wrote short book reviews of the thousands of titles he read, resulting in approximately 5,500 individual reviews. Many of these reviews could prove to be unique. The reviews are mostly on typed single-page sheets. The regional significance is clear, given that Chester lived in Winnipeg throughout his life. These undated reviews, arranged by last name of the author of the books reviewed, will be of interest to scholars and students researching the early history of science fiction and fantasy.
This material has been digitized and is available through the Internet Archive on behalf of the University of Alberta Libraries: https://archive.org/details/ualbertacuthbertreviews&tab=about