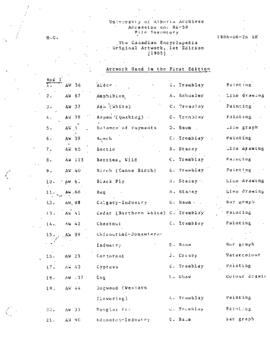 13 m of textual records and other material.

The New Canadian Encyclopedia Publishing Ltd. was incorporated in 1979, as a wholly-owned division of Hurtig Publishers. It commenced operations on April 1, 1980 with the objective of researching, developing, and producing a New Canadian Encyclopedia by fall, 1985. The Encyclopedia was the brainchild of Mel Hurtig, owner of Hurtig Publishers of Alberta. Mr. Hurtig, a frequent visitor to schools and libraries across the country, was convinced of the need for a contemporary general reference work on Canada to replace "hopelessly out-of-date" reference texts currently in use. In the mid-1970's, Mel Hurtig began to research funding possibilities for such a large publishing undertaking. He approached Canada Council officials and other funding sources, but was eventually successful with his request to the Alberta government's 75th anniversary committee. In 1979, $3.4 million was awarded to the New Canadian Encyclopedia Publishing Ltd. for research and development, and $600,000. to buy free copies for 24,000 libraries and schools in the country and for every diplomatic post abroad. All production costs were absorbed by Hurtig Publishers and defrayed by the sale of the other 80,000 editions in the first printing. A Managing Director, Frank McGuire and an Editor-in-Chief, James Marsh were hired in 1980. Together, they hired the editorial, production, and office staff responsible for overseeing the production of the three-volume Canadian Encyclopedia. The offices of the Canadian Encyclopedia were housed on the University of Alberta campus, and technical support from the University made possible the on-line data entry, storage and retrieval of information, and the computer typesetting of entries through the textform software program. A major subject list in the fields of arts, humanities, social sciences, and sciences was drawn up and editorial teams hired to deal with them. Each team consisted of a senior editor and an editor-researcher. The senior editors assembled a ten person national advisory board chaired by Dr. Harry Gunning of the University of Alberta. As well, some 200 consultants or subject specialists from universities, the federal and provincial public service, scientific institutions, and quasi-government institutions like art galleries and museums were contracted to assist the editorial staff in determining subject lists and selecting contributors. The writing of encyclopedia entries was assigned to 2500 contributors. While the majority of the contributors came from academe, they also included such authors as Margaret Atwood, Pierre Berton, and Peter C. Newman. Contributors were paid a nominal fee, or could accept payment in free copies of the encyclopedia. Consultants and expert readers evaluated all articles prepared for the encyclopedia to ensure authenticity of facts, the fair dealing of controversial issues, and balanced viewpoints. The finished encyclopedia contained some three million words in about 14,000 articles with an additional 1800 illustrations including photographs, maps, diagrams and charts. It was completed and to the public in 1985, while preparations began on preparing a second edition of The Canadian Encyclopedia for publication in 1988. In the words of Harald Bohne, the Director of the University of Toronto Press, The Canadian Encyclopedia is "a major undertaking of national importance not likely to be repeated in this century."

The Canadian Encyclopedia fonds provide a comprehensive and detailed record of one of the largest and most important cultural undertakings in Canadian publishing history. The records are extensive, and detail the process involved in producing a large reference publication from the inception stage through to final publication. The fonds consist of approximately 13 metres of records, excluding illustrative material that is to be returned to the Archives at a later date. The material was donated to the University of Alberta Archives in 1986, and original order was subsequently disrupted in the re-boxing of records from binders, filing cabinets, and closets for transfer to the Archives. As well, some of the records were still active and being consulted in preparation for the second edition publication of The Canadian Encyclopedia. The volume of records has meant that the fonds will be arranged and described in three phases. Phase one, which this inventory represents, involved a complete overview of the entire fonds, the restoration, where possible, of original order, and the file level description of six of eight series. Within each of these series, sub-series designations were assigned to better organize and describe the records. Each series is further described in an introduction preceding the series listing. Original file titles, if they existed, were retained by the archivist in the description. A subject and name index is found at the back of the inventory to further assist in locating specific information. These records have tremendous research value. The administrative and financial records provide a complete business history of the project. Based on correspondence, internal memoranda, meeting minutes, and monthly reports, etc. the researcher is able to better understand how the publication was planned, produced, and delivered to the public. The internal operation of The New Canadian Encyclopedia Publishing Ltd. are revealed through the procedures manuals and internal instructions which outline operating practices, guidelines, and editorial methodology. The files also provide an original and comprehensive picture of the publishing business from a Canadian perspective. The article and entry files contain samples of work by top Canadian academic experts. Because the editors were constrained by space and subject limitations, not everything they received could be printed in the encyclopedia. The files complement the published record, indicating how articles were edited, categorized, and sometimes cut altogether. Material, not published in the Encyclopedia, is retained in the files. The records are in excellent physical condition and multi-media in composition. The series and file listings follow.

Eight broad series were identified, and listed as follows:

The Canadian Encyclopedia fonds are open for research with the exception of three files that require permission from the Chief Archivist to view: Box 1, 91-83-17 and 18 and Box 4, 91-83-15. Restrictions on Use Contact Archivist for use restriction.