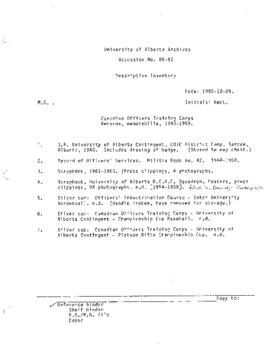 The Canadian Officers' Training Corps (COTC) trained university undergraduates for officer commissions in the Canadian Army reserves. In peacetime, the University of Alberta Contingent offered students military training and a vehicle for fulfilling the University's physical education requirements. It experienced its highest enrollment, however, during the two World Wars. In 1916 it sent a company to the 196th Western Universities (Overseas) Battalion under Commanding Officer H.J. MacLeod, in addition to contributing to other combat and medical units. During World War II the Contingent provided 1200 personnel to active service, 600 on commissions. The COTC was eventually subsumed by the Regular Officersþ Training Program as part of the reorganization of the Canadian Armed Forces.