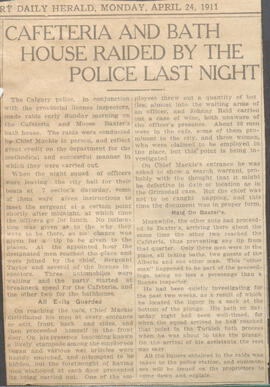 “The Calgary police, in conjunction with the provincial license inspectors, made raids early Sunday morning on the Cafeteria and Moose Baxter’s bath house. The raids were conducted by Chief Mackie in person, and reflect great credit on the department for the methodical and successful manner in which they were carried out.”

During the police raid on the Turkish bath house, one of three clients found bathing was in fact an undercover license inspector, who “had been quietly investigating for the past two weeks, as a result of which he located the liquor in a sack at the bottom of the plunge.”