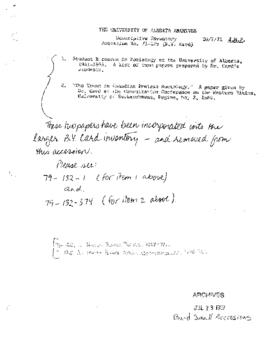 Brigham Young Card, born in Cardston, Alberta to a prominant Morman family, received his BSc (1942) and BEd (1947) from the University of Alberta, and his PhD from Stanford University (1959). He began his teaching career at the University of Alberta in 1945 and joined the Faculty of Education in 1950. In 1967, he became a full professor in the field of Sociology of Education. Dr Card retired from the University in 1979, and was appointed Professor Emeritus in 1981. From 1981-1984, B.Y. Card taught at Red Deer College, and in 1984 was awarded the Sir Frederick Haultain prize in social sciences for introducing and developing educational sociology in Alberta. His major research interests included: community development, Indian and Metis culture, and the sociology of Mormonism. The Cards retired to Lethbridge, and Dr. Card passed away there ca. 2004.