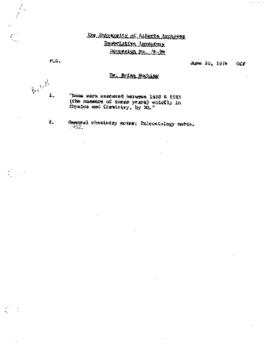 Entomologist, 1914-1974. Brian Hocking joined the University staff in 1946 and was appointed professor and head of the Entomology Department in 1954. Author of three books and numerous articles, he was an international authority on insect flight and the control and behaviour of blackflies and mosquitoes. He conducted research for the World Health Organization on insect-borne diseases in Burma and acted as consultant for numerous local and federal agencies. Among other honours, he received the Entomological Society of Canada Gold Medal in 1973.