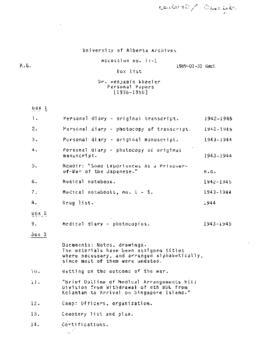 Physician, 1910-1963. Benjamin Wheeler graduated from the University in 1935. He studied tropical medicine in London, then served in the India Medical Service, 1937-1941. While a medical officer with the British in Malaya, he became a POW and spent 1942-1945 in a Japanese camp in Formosa. During his time there, he maintained detailed diaries and case records. After the war he worked at the Baker Clinic in Edmonton; co-founded the Alberta Society of Internists; and did extensive research on extreme deficiency states, congestive heart failure, and peptic ulcers. At his death in 1963, he was the head of the Department of Internal Medicine at the University of Alberta.