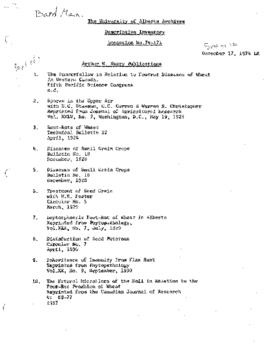 Plant pathologist, 1896-1988. A.W.C. Henry was a professor of plant pathology from 1922 to 1962 in the Department of Field Crops (later Plant Science). After his retirement from the University as Professor Emeritus, he joined Alberta Agriculture's Crop Clinic Laboratory (later Plant Industry Laboratory), where he continued to conduct research for more than fifteen years. He was a widely published expert on the biological control of soil-borne pathogens and flax disease and developed a new strain of flax resistant to rust.