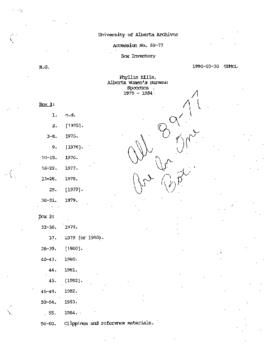 The Women's Bureau was established in 1966 by an Act of the Government of Alberta as the Womenþs Cultural and Information Bureau. It became the Womenþs Bureau in 1970, and in 1984 it was succeeded by the Women's Secretariat. Under the directorship of Phyllis Ellis, the Bureau compiled information on women's issues and made it available to individual women, women's groups and other interested parties through newsletters and other publications.

Fonds consists of records pertaining to the Alberta Women's Bureau.