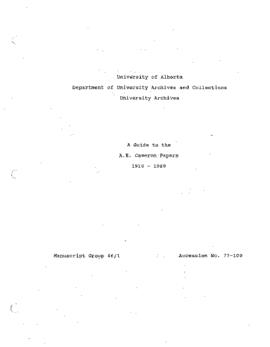 Dr. Cameron became acquainted with the University of Alberta through assisting Dr. John A. Allan, head of the Department of Geology, in the Kicking Horse Pass area during the summer of 1912. While he was completing his M.Sc. in Mining Engineering at McGill University in 1914, he was invited to become a lecturer in engineering and geology at the University of Alberta. He came to Edmonton that fall, and remained with the University until 1937. The First World War interrupted Dr. Cameron’s teaching career, but he returned to Edmonton in 1919 after instructing in the Khaki University, established by Henry Marshall Tory. During the summers he made geological explorations for private industry and the government in Northern Alberta and the Northwest Territories. His explorations and surveys for the Geological Survey of Canada and for mining and petroleum companies, many times with the assistance of students from the Department of Mining and Metallurgy, included the areas of Hay River, Beaver River, Great Slave and Great Bear Lakes and Lake Athabasca. In 1920 Dr. Norman C. Pitcher was appointed Professor of Mining and head of the Department of Mining Engineering (now the Department of Mineral Engineering); A.E. Cameron thereafter concentrated on metallurgy. He completed his studies toward his Ph.D. from the Massachusetts Institute of Technology during this period, receiving his doctorate in 1926. He was active in research as well as in field surveys, and served as Secretary of the Research Council of Alberta for ten years until his departure from the province in 1937. Cameron was also an active member of the “Murderers’ Club.” To the regret of the University community, Dr. Cameron left Edmonton to become Deputy Minister of Mines for the province of Nova Scotia. In 1947 he became President of Nova Scotia Technical College, remaining in that post until his retirement in 1957. During this period Dr. Cameron guided the College to full university status. Numerous honours and honorary degrees were awarded to Dr. Cameron.

The fonds consists of two leather bound photo albums. The photos were taken during Cameron's research field trips into northern Alberta, Saskatchewan and British Columbia. Cameron usually performed the trips for the Department of Mining Engineering with senior students. The first album, titled University of Alberta, 1915 -1938, was created for the Department of Mining Engineering. The second album, Field Trips, for Research Council of Alberta, were taken in 1921 and 1930. The photos remain in the arrangement Cameron created and the captions inform the descriptions for each photo.

Mr. A. E. Cameron donated the photos to the University Archives in December 1969.

All the A.E. Camerson material is open to researchers.