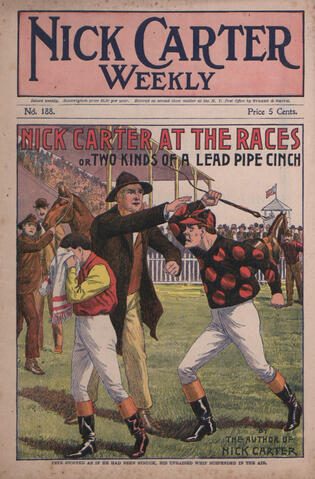 Introduced to American readers in 1860 by Irwin P. Beadle, the dime novel quickly grew in popularity, due to increased literacy rates, improved transportation systems, and mechanized, mass printing. England's version of the dime novel was the "penny dreadful", and these forms of paperback fiction, issued at regular intervals and priced at 10 cents an issue, were popular on both continents.

The dime novels were intended for the youthful, working-class population, and some series were eventually priced at only 5 cents, so as to make the weekly purchase more affordable for the average reader--typically, an adolescent working-class boy.

While the first dime novels contained extremely patriotic tales of Indians and pioneers, in the 1870s, different genres evolved, including detective stories, romances, urban outlaw tales, and "rags-to-riches" stories. The underlying theme of dime novel stories was that of sensationalism, and soon, the term "dime novel" came to apply to any fictional thriller released in serialised pamphlet form, regardless of the cover price. Well-respected authors' works were also reprinted in dime-novel format, including Jules Verne, Charles Dickens and Louisa M. Alcott, among others.

The most prolific publishing houses in the dime novel business were Beadle and Adams, which issued 25 series of novels, Frank Tousey, who issued 30 series, and Street and Smith, issuing 50 series.

The lurid cover illustrations were the novels' main selling point, along with familiar heroic characters featured in most series, usually having a catchy, alliterated name. Character development and continuity were secondary concerns to dime novel authors (of which there were many), and the practice of re-printing stories published in earlier dime novels was common. Many dime novel stories had also been previously published in the "story papers" that had been the choice of working-class readers before the introduction of the dime novel. The dime novel was meant solely as a light read, with enough action, suspense and heroic feats to keep the reader interested in buying the next issue. Today, they can provide us with unique insight into popular ideals and attitudes of late 19th and early 20th century America.

They can also provide us with a thrilling read.

The dime novels are arranged by series title. Series are numbered and listed in ascending chronological order, based on the original publication date of each series. Individual files within each series are arranged in ascending chronological order, based on their publication date. The folder number coincides with the individual issue number; hence, the numbering is not consecutive.

The items are housed in the University of Alberta's Bruce Peel Special Collections. Material is available for use by students, staff, and the general public in the library’s supervised reading room upon presentation of valid photo identification (e.g., ONEcard, driver’s license, passport, or citizenship card with photo).
All researchers (including students, faculty, visiting scholars, and members of the general public) must submit a Retrieval Request Form at least 24 hours before their visit to Bruce Peel Special Collections in order to be sure that library materials have been retrieved from storage and are available for their use.

Three series are shelved separately in Bruce Peel Special Collections.
A copy of issue #36, along with a series description, is held in the Dime Novel Collection (Series 6).