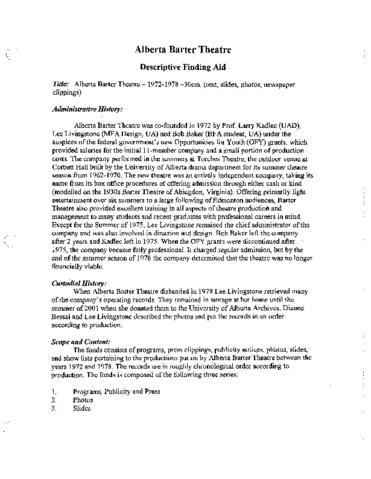 Alberta Barter Theatre was co-founded in 1972 by Prof. Larry Kadlec (UAD), Lee Livingstone (MFA Design, UA) and Bob Baker (BFA student, UA) under the auspices of the federal government's new Opportunities for Youth (OFY) grants, which provided salaries for the initial 11-member company and a small portion of production costs. The company performed in the summers at Torches Theatre, the outdoor venue at Corbett Hall built by the University of Alberta drama department for its summer theatre season from 1962-1970. The new theatre was an entirely independent company, taking its name from its box office procedures of offering admission through either cash or kind (modelled on the 1930s Barter Theatre of Abingdon, Virginia). Offering primarily light entertainment over six summers to a large following of Edmonton audiences, Barter Theatre also provided excellent training in all aspects of theatre production and management to many students and recent graduates with professional careers in mind. Except for the Summer of 1975, Lee Livingstone remained the chief administrator of the company and was also involved in direction and design. Bob Baker left the company after 2 years and Kadlec left in 1975. When the OFY grants were discontinued after 1975, the company became fully professional. It charged regular admission, but by the end of the summer season of 1978 the company determined that the theatre was no longer financially viable.

The fonds consists of programs, press clippings, publicity notices, photos, slides, and show lists pertaining to the productions put on by Alberta Barter Theatre between the years 1972 and 1978. The records are in roughly chronological order according to their production.

The fonds consists of the following three series

The Barter Theatre records are open for research. Restrictions on Use The University of Alberta Archives holds copyright on all the records of Barter Theatre save for the scripts which remain the property of the playrights. The researcher is responsible to verify that no distribution or other intellectual rights are attached to the material before publication or other forms of distribution.