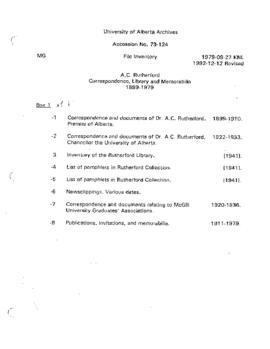 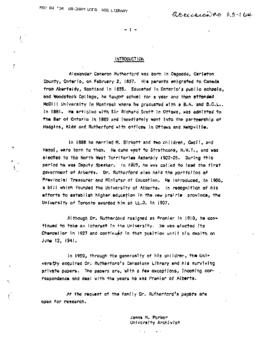 Alexander Cameron Rutherford was born in Osgoode, Carleton County, Ontario, on February 2, 1857. His parents emigrated to Canada from Aberfeldy, Scotland in 1855. Educated in Ontario's public schools, and Woodstock College, he taught school for a year and then attended McGill University in Montreal where he graduated with a B.A. and B.C.L. in 1881. He articled with Sir Ricarhd Scott in Ottawa, was admitted to the Bar of Ontario in 1885 and immediately went into the partnership of Hodgins, Kidd and Rutherford with offices in Ottawa and Kempville. In 1888 he married M. Birkett and two children, Cecil, and Hazel, were born to them. He came west to Strathcona, Northwest Territories, and was elected to the North West Territories Assembly serving from 1902-1905. During this period he was Deputy Speaker. In 1905, he was called to lead the first government of Alberta. Dr. Rutherford also held the portfolios of Provincial Treaseuer and Minister of Education. He introduced, in 1906, a bill which founded the University of Ablerta. In recognition of his efforts to establish higher education in the new prairie province, the Univerwsity of Toronto awarded him an LL.D. in 1907. Although Dr. Rutherford resigned as Premier in 1910, he continued to take an interest in the Univesrity. He was elected its Chancellor in 1927 and continued in that position until his death on June 12, 1941.

In 1950, through the generosity of his children, the University acquired Dr. Rutherford's Canadiana Library and his surviving private papers.

The A.C. Rutherford fonds consists predominantly of incoming correspondence concerning his years as Premier of Alberta. The documents are typed and handwritten and are generally arranged in their original chronological order.

At the request of the family the A.C. Rutherford fonds is open for research.